Vintry Ward lies within the boundary formed by Queen Victoria Street, Cannon Street, Queenhithe (named for the former Queens Hythe, or dock) and Cousin Lane. The Ward is close to Mansion House Tube station and is situated by Southwark Bridge. Within the Ward, in Upper Thames Street, is the Vintners’ Livery Company Hall. Nearby is the Wren church of St James Garlickhythe. In mediaeval times, French wine and garlic were landed at Garlickhythe, close by. This led to the church being part of the pilgrimage route to the cathedral of Santiago de Compostela.

Dowgate ward is bounded by Swan Lane, the River Thames, Cousin Lane and Cannon Street. The Dyers’, Innholders’, Skinners’ and Tallow Chandlers’ Livery Halls are all in Dowgate Hill. There is one church, St Michael Paternoster Royal, which is also the central office of the Mission to Seafarers. Cannon Street railway station is also within the Ward. 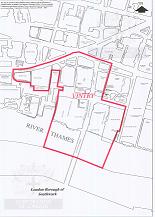 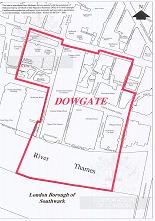